It’s easy to make assumptions about road safety data. For example, global deaths per 100,000 people stabilised during the first UN Decade of Road Safety (2011-2020). However, this statistic masks the fact that in 2016 (the latest available WHO data), 93% of road crash deaths occurred in low-income countries (LICs), up from 90% in 2013.

A report published in the Journal of Road Safety by Dr Soames Job, head of the Global Road Safety Facility at the World Bank, and William Wambulwa, a road safety consultant colleague, attempts to pick up on the reasons why.

Eleven per cent of LICs have no national speed limit law, compared with only 3% of MICs. “This reflects a common under-estimation of the importance of speed to both crash occurrence and survivability,” say the authors. Also, a number of countries in the Americas, for example, are unable to conduct effective random breath testing due to constitutional rights similar to those in the United States. And a mere 22% of LICs have a national seat-belt law covering front and rear seat passengers, versus 56% for MICs.

The under-reporting of even serious crashes is a “major issue”, with official records in LICs estimated to be missing 84% of crash deaths, let alone serious injuries. The capacity to manage road safety is therefore hampered by poor crash data to guide action.

A common fallacy in LICs is that to manage road safety they must first become HICs, and thus the focus of road development is on higher speeds and improving economic efficiency of transport. However, “in many circumstances increasing speeds leads to increased congestion and gains are marginal, especially for shorter trips”. The authors add: “Investing in road safety is a cost-effective means by which low and middle income countries (LMICs) can move towards becoming HICs.”

The costs of crash injuries and deaths represent “deeply disturbing” percentages of Gross Domestic Product (GDP) each year in all world regions, but particularly in Africa, say the authors. In LMICs these costs “substantially retard” long-term economic growth. Improving road safety is a means of helping LICs to become HICs, rather than speed.

Rural dwellers are at greater risk of crash death than urban dwellers. Even in high-performing New Zealand, the rest of the country has a crash death rate per 100,000 people that is 60% higher than the rate for its three major cities. The report notes: “These severe outcomes reflect the high-speed environment, delayed post-crash care, less enforcement pressure and unforgiving roads for the travel speeds.”

Mountainous roads present more risk than roads on flat terrain, typically by having more unpredictable curves and they present high risk in the event of error when driving near cliffs and drop-offs. These roads are expensive to build and more costly to make safe with roadside barriers to protect users from falling over cliffs. This risk is therefore more challenging for LICs to manage. 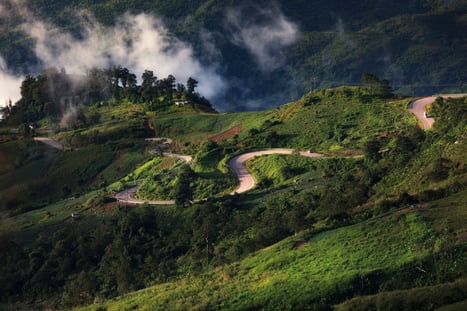 A Rural Road in Thailand

In direct statistical terms, says the report, the safest form of transport is a large bus, and the least safe is a motorcycle. LMICs have much higher proportions of motorcycles, being relatively inexpensive to run, compared with HICs. Consequently, in Europe only 11% of crash deaths are motorcyclists, compared with 43% in Asia.

Road infrastructure differences are profound, says the report. For example, 94% of pedestrian travel is on iRAP-rated 1- and 2-star roads in LICs, versus 55% for HICs. “The outcome is that LMICs suffer significantly more vulnerable road user deaths, especially pedestrians, which is in part due to weak provision of pedestrian safety infrastructure,” say the authors.

In putting together their report, Job and Wambulwa make the point that wide variations exist on road-safety performance within the three country-income groups. However, there can be no argument that the road-crash death and injury risks in LMICs are systematically higher than for HICs. As such, they deserve greater global focus and resourcing, including from multinational corporations.

The road-crash death and injury risks in LMICs are systematically higher than for HICs. As such, they deserve greater global focus and resourcing, including from multinational corporations.

The pair maintain that opportunities exist within LMICs for the cost-effective saving of lives and debilitating injuries. Among the solutions are better management of speed, improving safety infrastructure for pedestrians, increasing seatbelt use, and shifting travel from motorcycles to buses through provision of Bus Rapid Transit systems. But, as we all know, there’s a world of difference between an opportunity existing and an opportunity being taken.

Let’s hope the next decade will show a more even spread of improvement across the globe.

About the author
Steve Smethurst

Steve Smethurst is a journalist who writes for a wide range of publications, including the IOSH magazine and Aviva's 'The Edit'. He is a regular contributor to the Brightmile Business Driver Safety Blog.