The most dangerous roads in the world

Weather, geography and design all play a part, but some roads are just more hazardous than others

There are competing claims for the title of ‘world’s most dangerous road’. It’s a subjective choice, but heading most lists is the North Yungas Road in Bolivia. Also known as the ‘Road of Death’, at one time it was registering 70 fatalities a year for every 10 of its 43 miles. With narrow sections, sheer drops of 2000 ft and no guard rails, it easily earned its nickname. Drivers found it was often beset with fog, dust clouds, mudslides and waterfalls. However, a bypass was opened in 2006 and the route is now more known as a destination for thrill-seeking cyclists, so a different road must now take the title.

For many, this means that the Killar to Pangi Road in India now ‘takes the cake’ as Insurance4carhire puts it. The road runs through the mountainous Kishtwar region in northern India and features unguarded drops of 2,500 metres. It was constructed by local villagers ‘hundreds of years ago’ and little has been done to improve it since. Due to local weather conditions, it’s only open for a few months of the year and subject to poor visibility and mudslides. “Hundreds of deaths have been recorded over the years,” claims the website. The BBC tells of a typical journey where drivers had to reverse several hundred meters to find a passing spot. A 52km stretch took eight hours to navigate in the snow.

Equally hazardous – and an ever-present on ‘most dangerous roads lists – is Zoji La. The mountain pass is on Indian National Highway 1D, between Srinagar and Leh and is the second-highest in the Himalayas at an altitude of 11,500m. Only 16 miles long, it’s dangerously narrow, often closed, with sheer drop-offs. Add to that the mud, ice, snow and high winds it’s often subject to make it extremely hazardous. However, action is being taken to reduce the number of deaths. The Deccan Herald reports that a 14km tunnel is being constructed to give year-round access to Ladakh. It’s due to be completed by 2026. 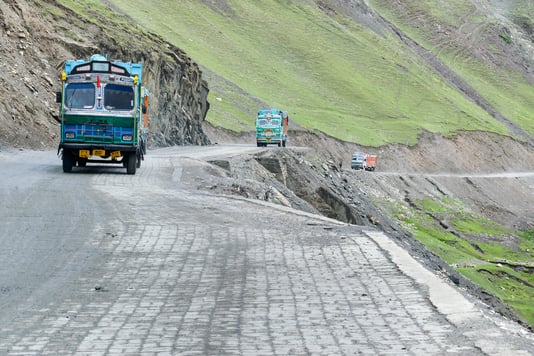 Altitude is a common theme and according to Dangerousroads.org, the Sichuan-Tibet Highway is infamous for “bad driving surfaces and sharp mountain-side hairpins”. With frequent single track sections, it veers through 14 mountains and features hairpin bends with big drops. Landslides, avalanches and general bad weather do few favours for the unpaved stretches of the road surface. At 2,242km long, it sees around 7,500 fatalities a year. “The sight of wrecked vehicles scattered along the highway are a common scene,” adds the website.

Not all dangerous roads are in the mountains of course. Michael Dreznes a former executive vice-president of the International Road Federation (IRF), once wrote that “the challenge for highway engineers is to utilise state of the art technology to provide kilometres of roads in very small areas near, or in cities around the world. This is where people want to live and this is where the roads are needed. One of the inevitable results, through no fault of the designs, just the lack of ideal geometries, will be black spots, or dangerous potential accident areas. These typically are areas where drivers need to make decisions.”

This certainly applies to Commonwealth Avenue in Quezon City, Philippines. It has a comparable death rate with the Sichuan-Tibet Highway, but couldn’t be more different. In the heart of a city, it features 18 lanes in parts of its 12km length. Often flooded due to poor drainage, it’s particularly dangerous for pedestrians, cyclists and motorbikes. Elephantcarhire notes that buses “often stop in inappropriate areas to pick up passengers, which results in vehicle collisions. And these collisions result in people walking along Commonwealth Avenue (often in areas where pedestrians are not allowed), which contributes to pedestrian fatalities.” 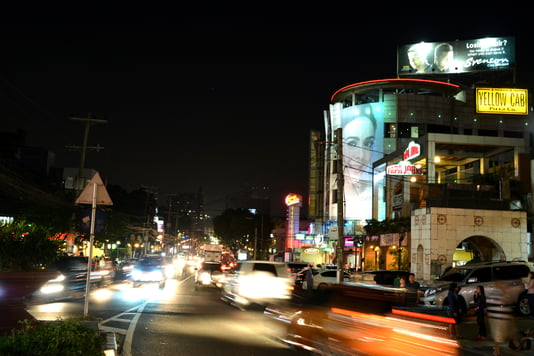 When it comes to Europe, the most dangerous road is Bayburt D915 in Turkey, at least according to Warrantywise. “This 66-mile long road consists of 29 hairpin bends with no railings or barriers to prevent cars from plunging off the edge,” says the website. Dangerousroads agrees, saying: “The road is in dreadful condition and requires strong nerves to negotiate it. It’s certainly breathtaking and has a fearsome reputation. Words can’t describe the road and pictures don’t do it justice.”

As for Africa, the N2 in South Africa is notorious. As Hippo notes: “Roads like this one are the perfect storm of speeding cars, careless pedestrians and high traffic volumes.” The Irish Times adds that the annual road death report compiled by South Africa’s Road Traffic Management Corporation ‘makes for grim reading’. “It lists six sections of the 2,255km N2 among the top 25 most dangerous in the country, with three fatalities recorded on them every day on average, which amounts to 1,095 over a 12-month period,” says the newspaper.

Nor is America immune. Its most deadly road is thought to be Interstate-4 in Florida. The 132-mile stretch links Tampa to Daytona. Automotive Fleet quotes a five-year analysis that ranks the highway as the most dangerous in the country. It carries a deadly combination of tourists visiting theme parks, commuters and freight. The combination of people who don’t know the roads and are driving slowly and those in a hurry to get where they’re going is a toxic mix.

The IRF’s Dreznes points out that, statistically speaking, the equivalent of three fully-loaded Boeing 747 aeroplanes crash every day on the roads around the world. “Too often,” he wrote, “unless the person in the accident is someone close to us or someone famous, no one notices. The death and the carnage continues with seemingly little concern by road authorities.”

If there is a glimmer of hope, it’s that things are improving. Bypasses are being built to avoid the world’s most dangerous mountain routes and highways globally are being mapped and given a safety-based star-rating using iRAP methodology. Research shows that a person’s risk of death or serious injury is approximately halved for each incremental improvement in star rating and governments are starting to take notice.

The mapping also presents an opportunity for employers. If you know the star rating of the roads your drivers operate on, you can advise on route planning, helping to keep your employees safe. In addition to internal comms, you can also pressure your local authority to improve the infrastructure it’s responsible for, which will benefit all road users, including motorbike riders, cyclists and pedestrians.

About the author
Steve Smethurst

Steve Smethurst is a journalist who writes for a wide range of publications, including the IOSH magazine and Aviva's 'The Edit'. He is a regular contributor to the Brightmile Business Driver Safety Blog.