There are many reasons that businesses consider driver management and safety. These can range from fuel cost monitoring to accident avoidance to legislative compliance and so on. However, the one thing that a lot of businesses should also consider is claims costs. How much will these claims cost and what will it do to my insurance premiums?

Perhaps the question that should be asked is, “What can I do to influence these costs and keep them as low as possible?” Success in this area will assist in the reduction of premium.

A byproduct of this is also improved safety, better management control of a fleet and usually, better engagement from drivers.

One of the easiest ways to do this is to improve your first notification of loss times. In the insurance industry, we know it as FNOL.

In short, a faster notification of loss allows insurers to manage a claim proactively.

FNOL solutions are available to insurers at a significant discount by virtue of volume and quite often can be far more efficient than the “ambulance chasers” with their various calls and texts asking if you have had an accident. No win no fee agents are simply in it to run a business and make money. But they don’t have to be used, and they are not cheap.

Their costs are in addition to the costs of the claim, and often their services, such as vehicle hire are much higher charges than your insurers can get it for with their buying power.

So, for a case study look at the picture below. I have changed a couple of the details for anonymity, but the essence remains true. 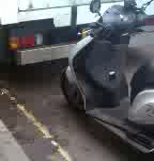 This moped was knocked over by a truck that reversed into it whilst the truck was manoeuvring. There was no-one on the moped, there was no-one injured, the moped suffered a damaged front mudguard, damaged brakes and some cosmetic damage.

The driver of the truck stopped and left his details on the moped. The moped was written off by the moped’s insurers and was valued at £850.00 ($1,082). How much do you think the claim was eventually settled for?

It closed at a little under £25,000 ($31,800)! Yes, that is not a typo. It doesn’t take a great leap to understand what effect this can have on an insurance premium, or even how popular the driver of the truck was with the fleet manager.

So, what on earth happened to get to this?

Well, broadly, the truck driver, despite giving his details to the moped owner at the time, did not report the accident to his firm or their insurers. Whether that was for fear of reprisals, or he simply forgot, we don’t know.

When the moped owner presented at his insurers approved repair garage, they told him that if he went with one of their “recommended” suppliers, let’s call them ABC, he could get a free courtesy moped until he was back on the road on one of his own.

This would be supplied as a “credit hire”, and the costs would be recovered directly from the lorry driver’s insurers. Of course, the moped owner said yes and very soon, he was zooming around quite happily on a hired moped.

So ABC tried to get the money back from the lorry drivers insurers. However, the insurers knew nothing about the accident as it has not been reported to them. The exact details of the truck and driver were not clear as it was a hastily scribbled note left out in the weather on the moped.

This meant that it was difficult to ascertain exactly what had happened and by whom the damage was caused. All this time, the hire charges are going up.

Eventually, when the hire charges hit around £10,000, the credit hire suppliers (previously delighted that they were on such a nice earner) got worried that they would lose the lot. So they instructed their legal agents to pursue the matter.

This racked up another £10,000. By the time you add the value of the vehicle on and a few sundries and extras, that is how the claim got to be so expensive.

Boil it down to why did this happen? In short, because the incident reporting procedures were, in this case, non-existent. Even a day or two can have a significant impact. It gives a chance for the no win no fee agents to make contact and instruct their medics, repairers, hirers and rehabilitation clinics at an inflated cost.

A hired in Ford Focus is around £70 a day. Insurers can usually supply a replacement where necessary at a fraction of that.

If the truck had been fitted with a suitable device, this would likely have triggered a collision event on the truck, whether as a result of the collision itself or the driver slamming the brakes on when he realised he had hit something. Alternatively, a well-communicated FNOL process combined with an FNOL reporting app would make it easy for the driver and more likely to have been reported efficiently.

Either way, this would mean that the fleet manager could begin to investigate and get that all-important FNOL off to his own insurers so they could manage the claim and keep costs down.

These costs are manageable, as are incidents and driver behaviour. A well trained and conscientious driver is far less likely to have this kind of thing happen to them. And most drivers that we speak to are very keen to point out just how professional they see themselves. They don’t want this against their driving record any more than the business wants it against claims costs. But they need to be engaged and understand the process.

Verlingue can also offer this content in the form of a toolbox talk for drivers over Zoom, and it takes around half an hour. Get in touch with Simon if you’re interested in finding out more.

About the author
Simon Cutmore

Simon Cutmore is the Director of Risk Management Division at Verlingue UK. He is a Fellow of the Chartered Insurance Institute, a Fellow of the Institute of Risk Management and a Chartered Safety and Health Practitioner. Simon has worked in risk management for nearly twenty years including devising one of the first trend analysis tools for motor fleets over twenty years ago and still in use today. He previously specialised in the management of complex insurance claims and now regularly delivers seminars/webinars on everything from toolbox talks direct to fleet drivers to returning to work following COVID and claims defensibility.